“The more science-fictional part of Home Fires uses war in space as a plot device. To get my heroine Chelle off-planet so I would get the time-disparity thing where she hardly ages while decades pass for people on Earth, I needed a war for her to fight. There they were, just waiting in the wings: the Os, the cyborgs. Somebody could probably grab a first-level cyborg and do some reprogramming, and wouldn’t that be interesting? Hook ‘em up to a computer, and start tinkering with the software. So I have Rick Johnson, who went to West Point but has been reprogrammed as a spy for the Os.

‘‘I’m told that I am a fourth-level cyborg now, because I’ve got a pacemaker. The whole thing with my heart problems just dropped into our lives like a bomb, because I had thought that for my age I was in excellent health. Then, after an echocardiagram, I found out I was actually scheduled to die within the next few months unless I had surgery! In the April-May-June quarter of 2010, I was admitted to the hospital five times. They would send me back to the nursing home and something would go wrong – off in the ambulance and back to the hospital. Riding in an ambulance got to seem normal to me, like taking a cab! (Boy, do those things jolt.)”

"Gene Wolfe takes us to a future North America at once familiar and utterly strange. A young man and woman, Skip and Chelle, fall in love in college and marry, but she is enlisted in the military, there is a war on, and she must serve her tour of duty before they can settle down. But the military is fighting a war with aliens in distant solar systems, and her months in the service will be years in relative time on Earth. Chelle returns to recuperate from severe injuries, after months of service, still a young woman but not necessarily the same person—while Skip is in his forties and a wealthy businessman, but eager for her return.

Still in love (somewhat to his surprise and delight), they go on a Caribbean cruise to resume their marriage. Their vacation rapidly becomes a complex series of challenges, not the least of which are spies, aliens, and battles with pirates who capture the ship for ransom. There is no writer in SF like Gene Wolfe and no SF novel like Home Fires." 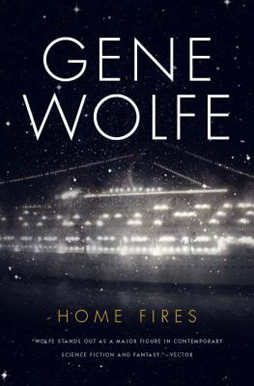