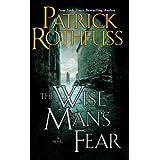 The book begins with the beginning of the new day in Kote's inn. After breakfast, Kvothe continues his story with the start of the admission lottery for the next term. He is scheduled for an interview on the eighth day. However, on the day of the interview, he is slipped a plum bob (an alchemical potion which lowers the ingester's moral inhibitions). As a result, he has to take his interviews later. To pay his tuition, he borrows six talents from Devi. He also spots Denna with Ambrose. Elodin stumbles in on one of Kvothe and Auri's meetings, during which he is convinced to allow Kvothe to join his new class on naming.

Denna reveals that Ambrose has a ring that belongs to her. Kvothe plans to please Denna by breaking into Ambrose's room and stealing the ring back. However, Ambrose returns early, forcing Kvothe to leave by jumping through the window before he is able to steal the ring. Meanwhile, Elodin's lessons are not going well. Kvothe then begins to experience odd problems with his body. He concludes that he is the target of malfeasance. Though his first reaction is to blame Ambrose, he also considers Devi. He attempts to make a defensive article called a gram, but has a hard time finding instructions for it. He confronts Devi about his blood, and a sympathetic battle takes place which Kvothe loses.

He is then forced to conclude that Ambrose has his blood, but does not know who it belongs to. He renews his attempt to make a gram, and is eventually successful. As a final step, he makes and executes a complicated plan to destroy his blood samples by setting fire to Ambrose's rooms.

Kvothe is then arrested for the incident in the previous book when he inadvertently attacked Ambrose by calling the name of the wind and breaking his arm. Though he is later cleared of all charges, it is suggested to him by Exal Dal, among others, that he should leave the University for a few months. Count Threpe persuades him to go to Severen, where the powerful Vintan noble Maer Alveron has need of a talented musician.

In Severen, the Maer reveals that he needs Kvothe's help to woo Meluan Lackless. Kvothe finds his favour by finding out that the Maer is being poisoned by his arcanist. While researching Meluan, he learns that she hates the Ruh because her sister ran off with one. Kvothe also finds Denna during one of his excursions to Severen-Low. He uses his feelings for her to write letters, songs and poems he then dedicates to Meluan. The wooing proves successful and Kvothe rises higher in the Maer's favor. However, one night he gets into a fight with Denna over her patron and ends up drinking. Because he is drunk, the Maer is able to persuade Kvothe to go on a journey to the Eld, to get rid of some bandits who were waylaying the Maer's tax collectors.

Kvothe leads a group of four others as they attempt to find the bandits. One of the mercenaries, Tempi, is an Adem. Kvothe persuades him to teach him Ketan(a series of combat moves) and the Lethani, a spiritual path that all Adem follow. After much searching, they eventually find the bandits, and although they were heavily outnumbered, Kvothe manages to kill many of the bandits by using sympathy. Their leader, who seems familiar to Kvothe and is indifferent to arrow wounds, escapes. While attempting to find the road again, they encounter Felurian, the mythical Fae woman whom no man has ever survived. Kvothe falls under her magic and starts to chase her. His fellow mercenaries flee.

Kvothe is initially seduced by Felurian, but he regains control of his mind and matches wills with Felurian. He calls her true name (although he believes himself to be calling the name of the wind at the time) and is able to temporarily throw off her magic. He composes half a song about her, and convinces Felurian to release him, so that he will be able to spread the song he has written about her among humans. Felurian agrees to let him go, provided he promises to come back. She weaves him a cloak of shadow, called a shaed, to keep him safe. While staying with Felurian, Kvothe meets the Cthaeh, a malevolent, omniscient oracle whose influence is known by the Fae to bring about disaster. Kvothe eventually leaves Felurian and catches up to the rest of his group. Although to his friends and other humans he has only been gone three days, it is hinted that he was gone much longer, perhaps as long as a year.

On the road back to Severen, Kvothe and Tempi encounter a group of Adem mercenaries, who become angry with Tempi for teaching Kvothe the Ketan and the Lethani. Kvothe agrees to travel back with him to help defend Tempi's choice to his superior, Shehyn. When Kvothe arrives in Ademre, he is put on trial by Sheyn and other Adem. The Adem agree to apprentice Kvothe to a teacher. Shehyn appoints another Adem, Vashet (meaning The Hammer in their language), to teach Kvothe. Kvothe finally passes two tests and proves himself a member of the Adem. He earns himself a new name, Maedre (meaning either The Flame, The Thunder, or The Broken Tree), and a two-thousand year old sword called Saicere (meaning 'the broken breath'), although Kvothe renames it Caesura. He then leaves for Severen.

On his way to Severen, he runs into a traveling Ruh troupe. Their odd behavior seems suspicious to him and he finds that they had two girls with them whom they had kidnapped from a nearby town and then raped. Kvothe poisons their food, and during the night while the false Ruh troupers are sick, Kvothe uses Caesura and his shaed to stalk and kill the troupe. Kvothe leaves their leader mortally wounded but alive and interrogates him. He discovers that the Ruh impersonators had killed the real troupe earlier and were masquerading as a troupe for cover. Kvothe leads the two traumatized girls back to their town and then resumes his journey to Severen.

In Severen, he shares his theory about the Amyr with the Maer, who has come to the same conclusion. The Maer and Meluan (who have been married in the meantime) show Kvothe the Lackless heirloom which is shut in a chest. Kvothe then reveals to them his actions after leaving the Adem. Kvothe becomes enraged after Meluan rants about the Ruh, and Kvothe reveals that he is also of the Ruh and consequently insults her. The Maer becomes angry and asks him to leave Severen. However, he agrees to pay Kvothe's tuition at the University indefinitely for services rendered.

Kvothe returns to the University, where he learns that he was presumed dead. He makes a deal with the University bursar (treasurer) to drive up his own tuitions in return for half the tuition above ten talents. He also starts earning compensation for sales of his Bloodless device, which is his invention that protects the bearer from fired arrows. As a result, he achieves financial stability. He reduces his work at the Fishery, and uses the time to further his naming studies. Stories about his time with Felurian, the Adem and Trebon have become famous even in Imre and the University.

During a trip to Tarbean, he saves Denna from an asthma attack by calling the name of the wind, similar to what Abenthy did for Kvothe in Book 1. They reconnect to some degree, yet Kvothe's new experiences make him desirous of a more solid romantic connection, causing Denna to withdraw. Only when he presents her with her lost ring does she temper her anger. The two part on mediocre terms as she heads north while Kvothe remains at the University.