Le résumé :
Humanity has colonized the solar system - Mars, the Moon, the Asteroid Belt and beyond - but the stars are still out of our reach.

Jim Holden is XO of an ice miner making runs from the rings of Saturn to the mining stations of the Belt. When he and his crew stumble upon a derelict ship, The Scopuli, they find themselves in possession of a secret they never wanted. A secret that someone is willing to kill for - and kill on a scale unfathomable to Jim and his crew. War is brewing in the system unless he can find out who left the ship and why.

Detective Miller is looking for a girl. One girl in a system of billions, but her parents have money and money talks. When the trail leads him to The Scopuli and rebel sympathizer Holden, he realizes that this girl may be the key to everything.

Holden and Miller must thread the needle between the Earth government, the Outer Planet revolutionaries, and secretive corporations - and the odds are against them. But out in the Belt, the rules are different, and one small ship can change the fate of the universe.

L'interview :
SF Signal: Leviathan Wakes is a book that that covers quite a bit of ground: it feels like there's a bit of everything in the book, from a sort of hard science fiction to classic space opera. Was this a deliberate move, to include so much?

Ty Franck: It's surprising to me how little of it was deliberate. When we began, the project we agreed we were working on was space opera with a lot of sentimentality. But once we started, the Miller character just seemed to demand a sort of Noir voice that Daniel pulled off really well. And other elements in the book couldn't be written without exploring social and political issues. And both Daniel and I are horror writers, so we couldn't stop ourselves from sneaking a little horror into the mix.

Daniel Abraham: As we went along and saw what was happening, we did make a conscious decision to lean into it, though. By about halfway through, we were talking about how to get the kitchen sink in there. But what came out of if really was what the story seemed to call for. 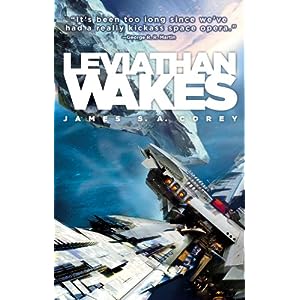