ActuSF : Your novel Grand Central Arena (GCA) has just been published in France by the Editions l'Atalante. May you introduce yourself, please?
Ryk E. Spoor :  I'm a long-time science-fiction, fantasy, and gaming fanboy who finally achieved his dream of being a published author in 2003 when Baen Books published Digital Knight. Since then, I've had 10 more books published by Baen, and self-published one, my Oz-based novel Polychrome. These have ranged from hard-SF (the Boundary series with Eric Flint) to épic fantasy (The Balanced Sword trilogy, beginning with Phoenix Rising), urban fantasy (Paradigms Lost), and space opéra (Grand Central Arena); a few more books are under contract.
My full-time job is as R&D Coordinator for International Electronic Machines, a small high-tech firm. Working at IEM has given me a lot of the background I use in writing my more science-based stories, and in addition I've ended up with several patents to my name.
In my more personal life, I'm married to a talented and lovely lady named Kathleen and we have four children (two boys, two girls), one dog, and a bunch of chickens. 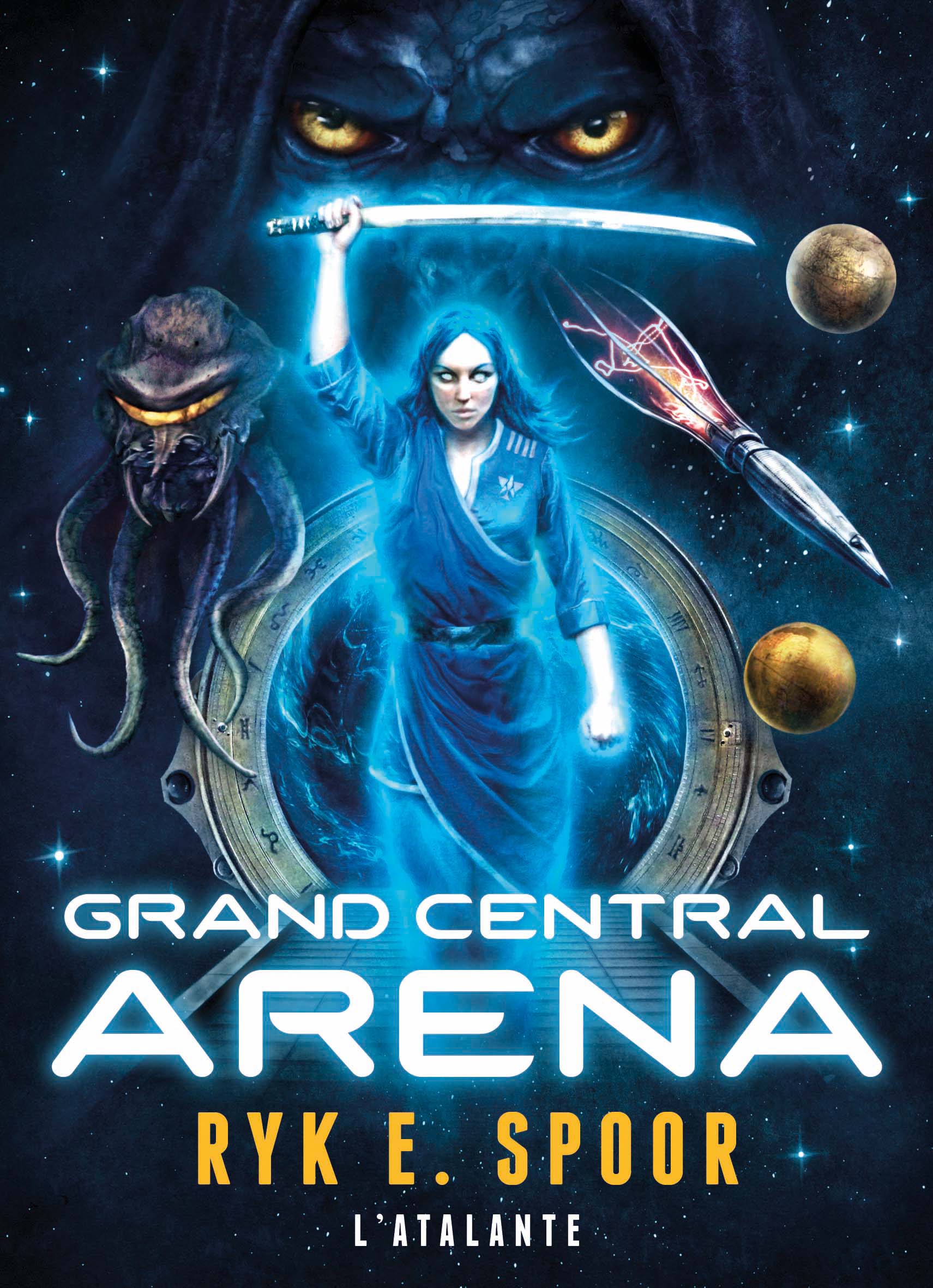 ActuSF : Grand Central Arena takes place in the " Arenaverse". What is it exactly?
Ryk E. Spoor  :  Heh. That's sort of a spoiler, so I'll start with a not-very-spoilery answer and then expand on it. GCA and its universe are my attempt to write a "Golden Age" space opéra with a modern sensibility, while still making clear nods to its inspirations – most importantly E. E. "Doc" Smith, the true father of space opera (author of the Lensman and Skylark series). A capsule description of GCA might be "Stargate meets Babylon 5 as written by Doc Smith".
To be more detailed… The Arenaverse is a space-opera answer to "why don't we see any évidence of alien species here?" (a question called the "Fermi Paradox" in SF circles). The answer being "because some species of incredibly advanced aliens has forced anyone who tries to use an FTL (Faster-Than-Light) drive ends up in the same place – the Arena – and is forced to learn to interact with other species according to the Arena's rules."
ActuSF : In GCA, we follow the adventures of the crew of The Holy Grail (Le Graal). What kind of spaceship is it? What about its crew?
Ryk E. Spoor  :  The Holy Grail is the création and brainchild of Doctor Simon Sandrisson, and is the first ship equipped with the "Sandrisson Drive" – a spacedrive that Sandrisson believes will allow faster-than-light travel and finally make travel between the stars a reality for humanity. In addition to the Sandrisson Drive, it is equipped with a mass-beam drive and emergency rocket engines.
Normally, in the Solar System of 2375, an experimental ship wouldn't have a crew, but Sandrisson's initial tests gave very odd results, forcing him to gather an actual living crew together, for a total of 8 people on board: Sandrisson himself, Dr. Marc C. DuQuesne (power engineer), Dr. Carl Edlund (controls), Dr. Stephen Franceschetti (design and systems), Dr. Gabrielle Wolfe (medical), Dr. Thomas Cussler (maintenance), Dr. Laila Canning (biological sciences), and Ariane Austin (pilot). Canning is present  purely as an observer, and Ariane is only on board in case – against all odds – the artificial intelligences running the automatic pilot fail.
Naturally, of course, they DO fail and only Ariane's skills keep them all from being killed. In Grand Central Arena, the three most important human characters are Ariane, Simon, and Marc – with Ariane becoming the leader over time.
ActuSF : At the beginning of the story, humans are trapped in the "Arena" and meet some alien factions. Who are  they?
Ryk E. Spoor :  The Arena has perhaps thousands of "Factions", but the five Great Factions are:
• The Molothos: A one-species faction which is basically the classic bug-eyed monsters of old pulp SF; they hate pretty much everything other than themselves and would conquer and destroy all other factions if they could.
• The Analytic: The scientists and researchers of the Arena, the Analytic is concerned with the search for knowledge. They are one of the most friendly factions.
• The Faith: Most people believe the Arena and its strange phenomena are the result of super-high technology. The Faith believe otherwise, that the "Voidbuilders" were nothing less than gods or angels, and that the Arena itself is an anteroom or testing chamber for Heaven. Their "Initiate Guides", the higher-level priests, have some abilities that give credence to their beliefs.
• The Blessed To Serve: A race of beings controlled by super-AIs called the Minds – although that control is limited in the Arena, where no AI can function, and thus the Minds are forced to stay in normal space and rely on their servant species to do their work.
• The Vengeance: Opposite of the Faith in a sense, they believe the Voidbuilders made the Arena as a trap for any other species, preventing them from attaining the same capabilities of the Voidbuilders, and the Vengeance intends to rip those secrets from creation and eventually hunt down the Voidbuilders themselves.
In addition, there are the Shadeweavers – not, technically, a Faction, but a group of mysterious beings who wield powers that seem magical.
For the purposes of humanity and our heroes, the other important faction is the Liberated, a faction consisting of just one member, whose name translates as "Orphan"; he is a revolutionary against the Blessed, the only one left in his faction, and proves to be an uncertain but useful ally.
ActuSF :  Is the arena just a place for fighting?
Ryk E. Spoor :  Oh, no, not at all. It is a meeting place, a central location as well as a separate universe, where all species can meet and negotiate. The Challenges that are the central mechanic for resolving disputes can be combat-oriented, but can just as easily be the equivalent of a chess match. I'll admit that – to keep the books exciting – most of the Challenges you're likely to see are going to be either combat-oriented, or some other contest such as a high-stakes race, since I don't want to bore my audience.
But non-Challenge events can involve a lot of political maneuvering and bargaining – there's more of that in Spheres of Influence, although you see hints of it in Grand Central Arena. 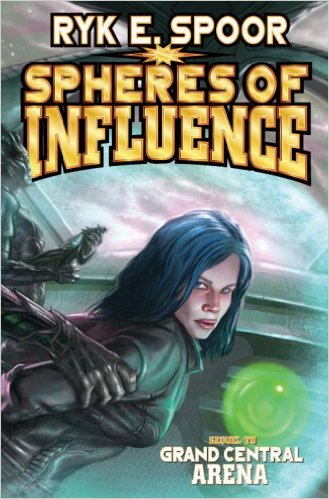 ActuSF : Spheres of Influence is the sequel of GCA. How many books are you going to write in the serie Arenaverse?
Ryk E. Spoor : At the moment I can only guarantee three – I'm working on Challenges of the Deeps, the third book in the series. To resolve all of the key elements – especially "What were the Voidbuilders and why did they make the Arena?" would take more books than that – I'd guess three or four more. I hope I'll get a chance to write them.
ActuSF : In 2015, it was the Puppygate at the Hugo awards. What do you think about it?
Ryk E. Spoor :  Honestly? The "Sad Puppies" were going about their goals in pretty much exactly the wrong way, the "Rabid Puppies" hijacked their movement and drove forward, the "Sads" didn't vehemently and absolutely break off with the Rabids, so the whole thing turned into a disaster. The voters, however, did the right thing and voted "We hate your attempt to stack the deck". That's a shame for some of the nominees, but the slate approach the "Puppies" were using poisons the entire process, and "No Award" was the right response to it. Saying this won't make me popular with a lot of other people in certain circles, but it's true. They might have (did) have a few legitimate points, but the way in which they decided to remedy the perceived faults? Just about the worst possible way, and most of their later arguments seemed to me to be convoluted justifications for not facing the fact that they'd fumbled the ball from the start.
You may ask "what was the right way, if the way they did it was wrong?". Simple: join the group, become part of it – a process that of course takes years, just like joining any large club – and influence it as time goes on. Yeah, you'll have to put up with years of things not going your way, and it won't get you fast results. Neither will blatantly gaming the system and trying to stack the deck, even if the approach is technically legal, because the whole group will then be mobilized against you – including the members of the group that might otherwise have been sympathetic to your cause.
ActuSF : What are your next projects? Will you come in France or in Europe?
Ryk E. Spoor :  Besides Challenges of the Deeps, I'm working on Princess Holy Aura, a very different book for me – based on the "mahou shoujo" or "magical girl" subgenre of anime/manga from Japan (the most familiar of these might be "Sailor Moon", but the subgenre is much older and broader than that).  I'm examining the assumptions of the subgenre from what I hope will be a fairly interesting perspective.
I'm also (almost certainly) going to have a story titled "The Adventure of the Reluctant Detective" in an anthology called Alternate Sherlocks, edited by Michael Ventrella, probably coming out next year.
The final volume of the Balanced Sword trilogy – Phoenix Ascendant – will be published next year. I am hoping that I will be able to start work on an associated trilogy, The Spirit Warriors, but I have no contract on that yet. There's a few other possibilities but no firm commitment yet on them; I have a space opera trilogy Demons of the Past out to various publishers, and a superhero novel Stuff of Legend being shopped around as well.
Insofar as going to France or other parts of Europe, I'd love to (as would my family). The main barrier would be financial – I can't currently afford such a trip. But if that changes, I would certainly like to.
ActuSF : French readers will soon discover you with GCA. What do you want to say to them?
Ryk E. Spoor : Besides "Buy my books!!", you mean? Well, first, I certainly hope that French readers will enjoy Grand Central Arena. With publication by l'Atalante, Grand Central Arena is now available in three languages (it was translated to Japanese back in 2011), and I'm extremely excited by that! Second – if you do enjoy Grand Central Arena, make sure you let people know, by reviews or other methods, because that'll make it more likely that Spheres of Influence will make it over there too! (That goes for all books by all authors: any book you like, review and talk about it; your authors will thank you!) And finally, if you want to know anything more about me or my work, visit me at http://www.grandcentralarena.com !
The interview translated in french 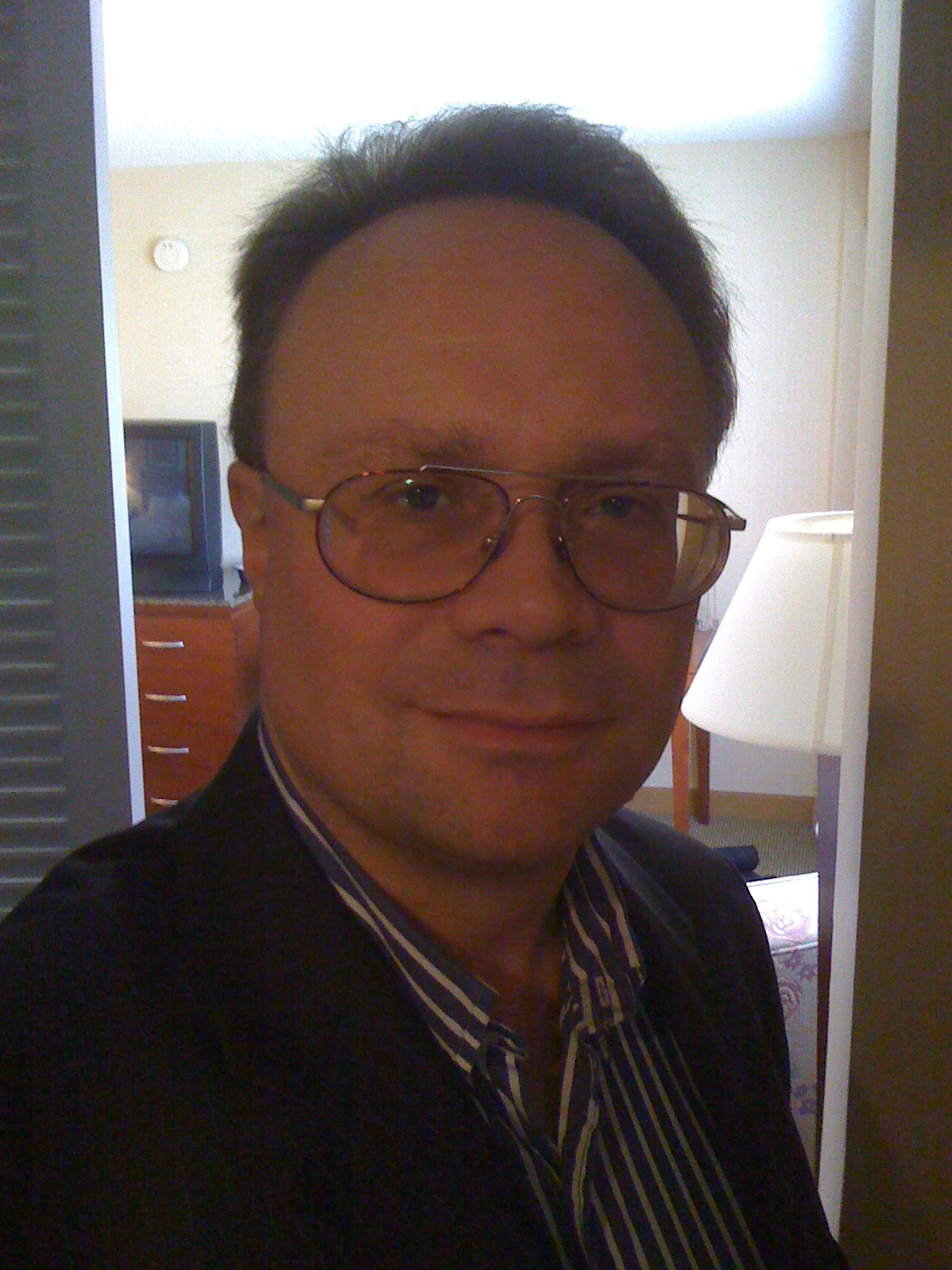