Multiple award-winning author Nancy Kress is well known for her novels, but all of her awards were for her short fiction, and she is at her best in the short form. Most of the stories in this collection have been picked for various “Year’s Best” and Reader’s Choice lists. The title story is typical of Kress; nanotechnology brings every wish to everyone, and yet on the human level problems of a dire nature are created. This is always the case with Kress: typically, you get two stories in one: a focus on cutting-edge technology and the emotional effects of such technology. In many of her stories the pathos of the human condition is explored, where humans plant seedlings and have to decide to weed or not weed—that is, to play God or let natural selection progress (“My Mother, Dancing”). Interfering with a culture, even to save lives, is not so straightforward in “”Ej-Es.” Not all of Kress’s stories end seriously; in “First Flight” a Space Cadet shines, in a homage to a 50s TV program. Artificial intelligences also show in several of the stories, as a persecuted slave of man (“Computer Virus”), or as the controlling force of the universe (“Mirror Image”), or even as one indifferent to humans at all (“Savior”). There is also hidden horror in Kress’s stories, in the method used to handle a sassy sixteen-year-old (“To Cuddle Amy”). From the center of the galaxy, to explore the nature of matter itself (“Shiva in Shadow”) to the swamps of Earth (“Wetlands Preserve”) you always get the trademark mix of hard science fiction interacting with humanity, with all the resulting emotions. These thirteen stories will satisfy old fans of Kress and breed new ones. 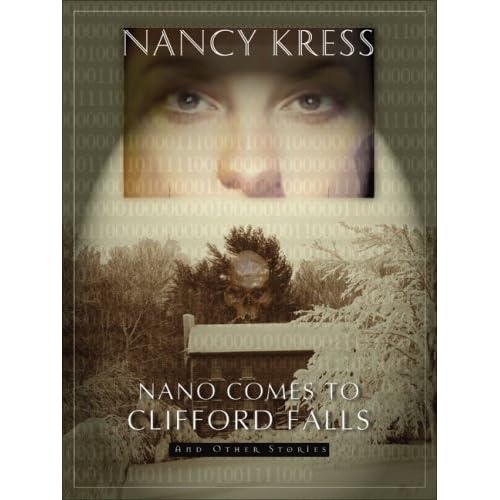