En voici la description :
Lieutenant Patricia Kelly Elizabeth Strickland-otherwise known as Podkayne-is a third-generation Martian. Her grandfather, Manny, was one of the first men to set foot on Mars. So Poddy has some planet-sized shoes to fill. That's why she's joined the Music, Arts, and Drama Division of the Martian Navy. Though some may say her voice is a weapon in itself, Poddy passed the audition. And now she's going to Europa, one of Jupiter's many moons, to be an entertainer. But she's about to learn that there's plenty of danger to go around in the Martian Navy, even if you've just signed on to sing.

After the epic disasters and hard science future of the two novels that preceded Rolling Thunder, this novel feels almost like an idyll, or a romantic comedy. How do you see the story of Podkayne fitting into the larger questions about the way Earth handles environmental disaster and space colony politics that you raised in the first two novels of the series?
John Varley : I don't, really. Podkayne is a Martian, through and through. Though she is saddened and horrified by events on Earth, she is more concerned with how it will affect Mars. She's not a scientist, nor is she political. Her only concern about the ongoing destruction of the Earth is for the people being uprooted, displaced, and killed, and with what she and her fellow Martians can do to help. The fate of the planet doesn't much concern her. You could think of her mission to Earth late in the story as being like the Concert for Bangladesh. She's doing what she can, but knows she can't stop anything. 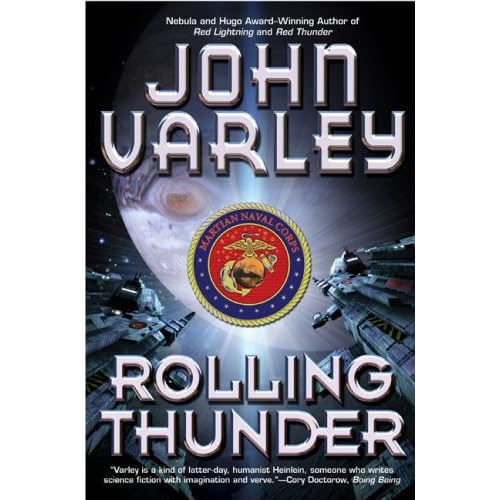