Le résumé :
When Albert Einstein told Franklin Roosevelt in 1939 that the atomic bomb was possible, he did not tell the president about another discovery he had made, something so extreme and horrific it remained a secret . . . until now. This extraordinary new novel from one of the most brilliant talents in contemporary fiction is a standout literary thriller in which one man stumbles upon the discovery Einstein himself tried to keep hidden.

When twelve-year-old Daphne Marrity takes a videotape labeled Pee-wee's Big Adventure from her grandmother's house, neither she nor her college-professor father, Frank Marrity, has any idea that the theft has drawn the attention of both the Israeli Secret Service and an ancient European cabal of occultists—or that within hours they'll be visited by her long-lost grandfather, who is also desperate to get that tape.

And when Daphne's teddy bear is stolen, a blind assassin nearly kills Frank, and a phantom begins to speak to her from a switched-off television set, Daphne and her father find themselves caught in the middle of a murderous power struggle that originated long ago in Israel and Germany but now crashes through Los Angeles and out to the Mojave Desert. To survive, they must quickly learn the rules of a dangerous magical chess game and use all their cleverness and courage—as well as their love and loyalty to each other—to escape a fate more profound than death.

A pulse-pounding epic adventure that blurs the lines between espionage and the supernatural; good and evil; past, present and future, Three Days to Never is an exhilarating masterwork of speculative suspense from the always remarkable imagination of the incomparable Tim Powers.

"SFRevu: Charlie Chaplin, Einstein, Kabbalistic magic, the Mossad, The Harmonic Convergence of 1987, Shakespeare's "The Tempest" and time travel. Phew! How did you go about pulling all of these things together, and meshing them into Three Days to Never?

Tim Powers: Well, they were all consequences of researching my original subject, which was Einstein! Einstein turned out to have several connections with Chaplin, so I had to read all about Chaplin -- and Einstein was a passionate supporter of Israel, so I wound up reading about the Mossad on one hand and Kabbalah on the other, and Einstein was forever messing with this invention of his, his "maschinchen," and it didn't seem like too long a jump to say it had to do with time travel! And of course I was fascinated to read about Einstein's mysterious first child, his daughter Lieserl who disappears from history at about the age of one. In real life I imagine she died about then, but for fiction I naturally decided she lived on, though secretly. I figured she would have accompanied Einstein on his exile from Europe, so Shakespeare's "The Tempest" occurred to me as a parallel -- and I wanted her to be still alive, or at least only recently dead, at the beginning of my story, so the year of the Harmonic Convergence seemed like a good year for the story to happen in. These connections always look natural to me when I stumble across them!" 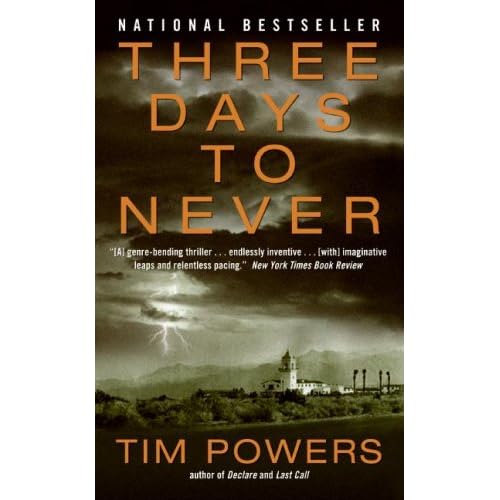